During  relief operations certain heart warming stories came to light, one such story is of  Captain Rupam Das who hails from Pathshala, Bajali district who became an example of service before self.

The dedicated Officer as part of the Indian Army Column for flood relief operations in Sathikuchi village in Nalabari District saved hundred of lives inspite of his house and his family members stranded during the same time.

His action is an exceptional example of selfless service to humanity, country people and the nation. Such inspiring acts manifest exceptional human values, strong military grooming and displays the foundational qualities of youth of the nation.

In an another incident, at Palepara village in Kamrup Rural, a cancer patient, a lady in her 40s, who was stuck at her home for past three days was rescued and further sent to hospital in Guwahati for advance health care. 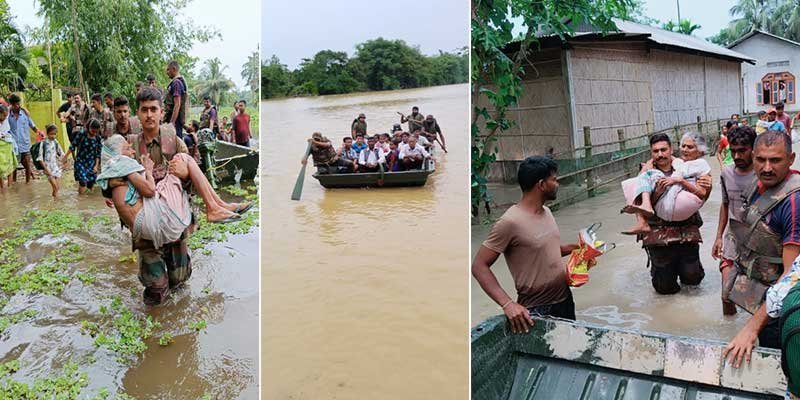 Three elderly people in their 90s were rescued safely at Kadamtola and Holapara in Baksa District. Such acts of selfless service are further strengthing the strong belief in citizens on Army of the Nation.

The flood situation in Assam remained extremely critical on Sunday with many new localities coming under the impact of the deluge in several districts of the state and overnight incessant rain inundating more areas in Guwahati.

At least five animals, including a leopard, have been killed in floods in Assam’s Kaziranga National Park KNP, so far this year, an official statement said on Sunday.

More than 15 per cent of the park area has been inundated with the Brahmaputra river, which passes through it, flowing above the danger level at several places, it said.